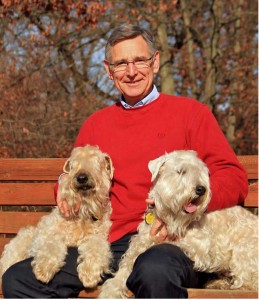 My Wheaten life began in early 2005 shortly after my 13 year old Schnauzer crossed over the rainbow bridge. I had been intrigued by the Wheaten Breed for a number of years but I was not able to successfully locate a good breeder.

Karen Mueller was recommended to me at the time and I gave her a call. That conversation let to my obtaining a 4 month old Wheaten named Murphy. He was truly a once in a lifetime dog. Unfortunately at 6 months of age he contracted an undetermined infection that wreaked havoc on his internal organs and after quite a battle and major surgery he succumbed. I was devastated to say the least.

Shortly thereafter Karen entrusted a 14 week old male to me that she had planned to keep for show. I named him Kramer and he is the most energetic dog I have ever come across it my lifetime. Since that time I added a second Wheaten to the pack, a 4 year old female named Dee Dee.
Both dogs are obedience and agility trained. They are also Certified Therapy Dogs. The dogs and I volunteer for an organization called Agility Angels. It is an all volunteer group that is set up to help children with autism. It is a place where “dogs teach kids to fly” A child is paired with an agility trained dog and the child learns to take the dog through the agility course. The great work the dogs do with these children is beyond words. In addition to Agility Angels work the dogs and I also walk 4 to 5 miles per day.

I have been a member of MCSCWTC since 2005, enjoy the various social events and admire the work done to promote Wheaten health and the breed itself. I am now am serving on the board and look forward to that time.

Click Here to visit our online store with many Wheaten artifacts, gifts and Wheaten necessities!